Jewelry
Jewelry rarely survives through the ages. They were often disassembled and remade into more fashionable pieces. So archaeological finds such as those found at Sutton Hoo or buried hoards like the medieval jewelry from the time of the Black Death are important because they give us an idea of what jewelry looked like in a particular place and time. Another reason why jewelry disappears is during wartime.
I was born and raised in Malaysia as part of a unique South East Asian fusion culture – a descendant of predominantly 15th -16th century Chinese male immigrants who married local Malay women in South East Asia. There was significant trade between the imperial Chinese empire and the region for many centuries, long before the Europeans arrived, as the area is where the famed spice islands are located. According to historians, some of the early settlers might have came from Kublai Khan’s large combined Chinese and Mongol invasion fleet  in the 13th century.

The Peranakan, as they became to be known as, settled mostly in some parts of Indonesia, Penang and Malacca in Malaysia (once British Malaya) and in Singapore.

Over time, the Peranakan, which literally means “descendants or local born”, developed a unique style – a blend of Chinese, Malay, Indian and later on, European influences – for literally everything in their lives. From architecture, interior design, housewares, cuisine, clothing to jewelry, they had a strong sense of design. When Malaya and Singapore were later colonized, the Peranakan were quick to assimilate British customs and even the language into their already rich patois.
My Ah Mah (1912-1990), my maternal nonya (female Peranakan) grandmother was a professional artisan in her own right even though she was not educated. Girls were not sent to school in her time. She couldn’t read but was an amazing crafter. She learned how to crochet simply by carefully unpicking baby bootees! Self taught, she became skilled at creating intricate machine embroidered Peranakan clothing on her treadle machine – see my past post 100 years of South East Asian Nonya Embroidery.
The 1930’s picture at the top shows her wearing the traditional triple nonya brooch kerosang (brooch) which fastens her buttonless cotton jacket.  She added a pendant necklacem earrings and a coronet to her outfit.  The kerosang were first popularized by the nonya in Penang, my home state, before spreading to other areas.

This picture of my step great-grandmother below – also from the same era – shows more clearly the ibu (mother) and one of the two anak (child) kerosang.  Named so because the main paisley shaped brooch is the biggest of the triple set.  The kerosang in both photos are virtually identical which makes me think they were shared between the two women for their formal portraits.  These were clearly the family’s best pieces. 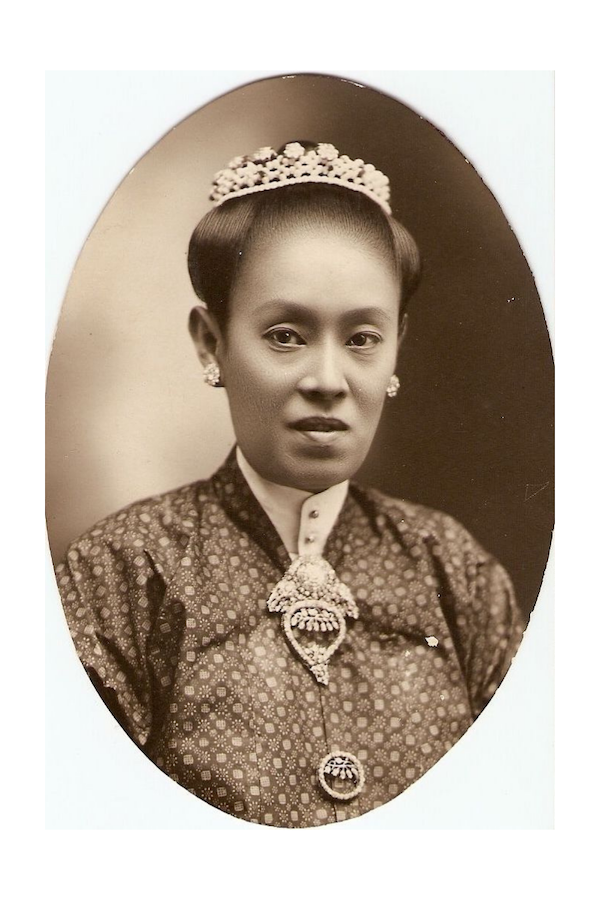 What is distinctive about Peranakan jewelry the frequent use of 18k- 22K gold and diamonds called intan as shown in this photo of a vintage ibu anak kerosang set. (See the Gemgardener for more spectacular Peranakan jewelry examples).
Intan are Peranakan style rose cut diamonds. Intan gems are unique to South-East Asia. The rose cut technique was first developed in India in the 17th century. The diamonds were sliced or hand cleaved with few and uneven facets. They were flat i.e. they lack the point (pavilion) of modern brilliant cut diamonds. The intan is very similar to partially faceted style of Indian polki diamonds which dates back to the Mughal era (1526-1857). Indian polki diamonds can also be uncut and simply polished like cabochons.

Most old Peranakan intan are thought to have came from the diamond mines in Southern Kalimantan (Borneo) in Indonesia, the only ones in the region. 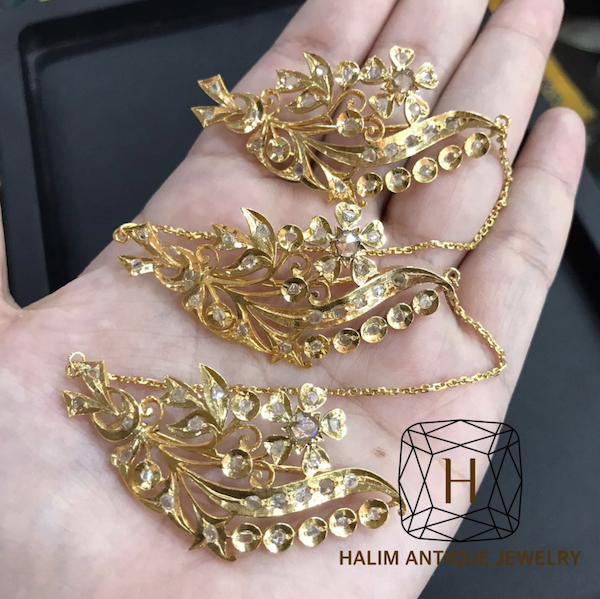 Delicate Victorian or Art Nouveau style of designs predominate but other designs also exist. It was really up to individual nonyas what they wanted to wear. They visited their favorite goldsmiths whenever they had the means and urge to add to their jewelry collections.

Designs were collaborations. I remember accompanying my mother on such occasions where the goldsmith would sketch design ideas based on what she wanted. She would have acquired a gemstone  directly or indirectly from a local gem trader – my father sometimes bought her gemstones as gifts.

Shown here is an amazing 1960’s vintage ring making full use of several small grey intan diamonds in a modern design. By themselves, a grey intan lacks impact but in a group, they can be gorgeous. 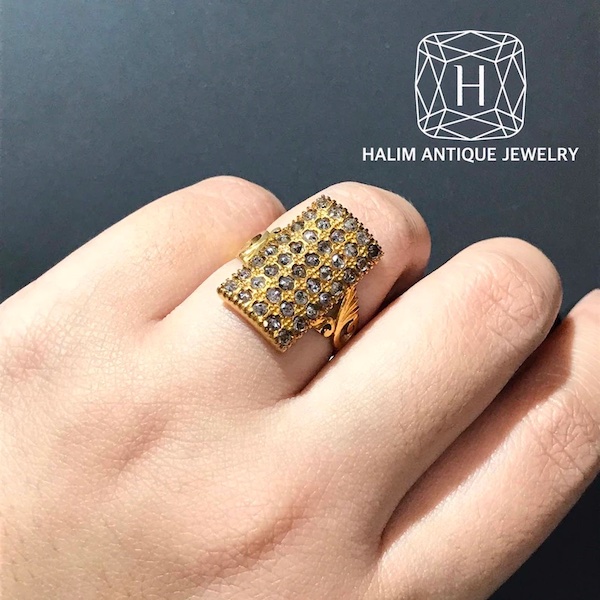 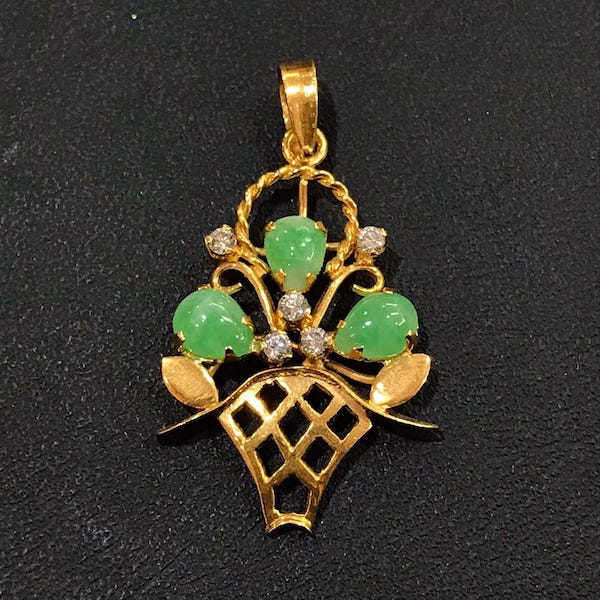 Jewelry was important to the nonyas. Women back then were uneducated. They did not work outside the home or own property. But Peranakan culture was such that girls and women were often gifted precious jewelry as much as their families could afford. These were not just their best accessories but tangible possessions they could truly call their very own. The nonyas would proudly pass their jewelry collection down to the next generation.  Precious gold and gemstone jewelry was also their security to be used in time of great need.

When I was young, I was amazed by my grandmother’s jewelry in the old photos especially the huge heavy-looking anklets in her wedding photo above.  These were probably hollow silver gilt hinged anklets like this one owned by Enticz who has a sizeable collection of all things Peranakan as well as antiques. 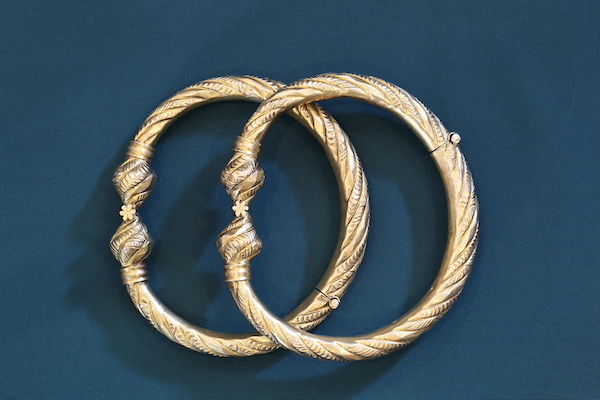 Some pre- Second World War Peranakan jewelry have survived and are now in museums and private collections. But as for my family’s jewelry in those old photos? I asked my Ah Mah where they were and she replied, “All gone”. Save for one piece.

Like her contemporaries worldwide who lived through the 1918 pandemic and two World Wars, she endured years of privation, hardship, fear and sorrow especially during WWII, yet never complained or spoke much about her experiences. That stoic generation just did what they had to do, to survive, to raise their families without any help and without knowing when the war would end.

In the late 19th and early 20th century,  Japan militarized after seeing several Asian countries becoming colonies of Western powers. It was a time when Imperial China was viewed as a piece of cake to be devoured by powerful European nations.  The Japanese reasoned the only way they could escape the same fate was to become a colonizer themselves. By 1905, their navy was strong enough to defeat the Russian navy in the Battle of Tsushima.  By the 1930’s Japan had taken over Korea, Manchuria and invaded China.  They also set their eyes on South-East Asia and its rich natural resources – timber, rubber, tin etc.
Most Americans know December 7, 1941 as the “ Day of Infamy“.  But how many know the Japanese actually launched a three-prong attack that day? They not only crippled the US Navy at Pearl Harbor but simultaneously landed in British Malaya and the US-controlled Philippines, their main objectives. The fall of Singapore soon followed- one of the worst bungled military defeats in British Army history. Without fleet support, tens of thousands of American and Filipino armed forces fought bravely, with huge losses, during the Battle of the Philippines. The Philippines fell to the Japanese in early 1942.

The local populations were thus left to fend for themselves. Many families like mine were in grave peril. Peranakan jewelry making probably ground to a halt during this time.

My parents were children then. My mother recalls being very sick because there wasn’t enough proper food.  Extended family stayed with them because they lost their home to Japanese bombing raids. My maternal grandfather did not earn enough from his Japanese overseers to feed them all.  No wonder Ah Mah sold off everything of value in desperate attempts to buy food. Ah Mah and the women in the household helped out at a family drinks and cakes stall.  Ah Mah also sewed custom kebayas clothing which the nonyas wore – anything to bring in extra income.

Many children also lost out on 4 years of schooling. Families kept adolescent girls and young women at home and out of sight as the risk of abduction to serve as “comfort” women for Japanese troops was real. Japanese soldiers were “billeted” to local kitchens for their food. Mum’s family house was the one they used for frying eggs. Ah Mah would hide the young women of the family in a bedroom whenever Japanese soldiers came to the house.

My paternal grandfather became the manager of a rubber plantation when the British owner fled to Singapore. He narrowly escaped being beheaded by an incensed Japanese officer over a misunderstanding about the price of the plantation chickens. As far as that Japanese commandant for the area knew, my paternal grandparents were childless. There were actually eight of them! My father and his mostly older brothers and sisters hid in two small huts deep in the jungle for four years.

He was just a boy of 10 when the war broke out. Dad never read us stories from books when my siblings and I were young but he told us stories of how they survived in the jungle where finding food was the main preoccupation. 9-year-old Me :”What did the iguana you caught taste like?” Dad :”Chicken.”

Too young to take part in his older brothers’ dangerous wild boar hunts involving pit traps and dogs, he still helped find food by fishing in crocodile infested rivers – the crocodiles nearly got him on a couple of occasions. My paternal grandparents lived in fear Japanese jungle patrols would stumble upon their children. They were close at least once, according to family lore.

There was just one pre-war family jewelry survivor – a very old, pitted, well-worn gold ring shown below.  It is actually a man’s ring, a wedding gift from my grandmother’s parents to their new son-in-law. But my grandfather refused to wear any jewelry after their wedding, so my grandmother wore it instead.

The simple multi-prong ring features an unusually large intan with few facets, visible inclusions and poor clarity. Large intan – a diamond “skin”, hand cleaved from a raw nugget – were often flawed. Ah Mah saved this ring not because she couldn’t sell it but because it was a gift from her mother. When I was old enough, she gave it to me. This ring is beyond price. 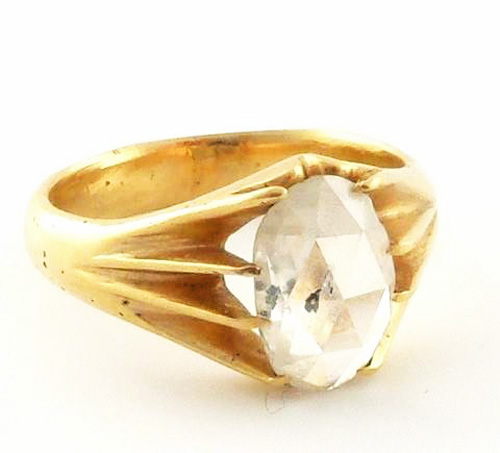 The art of Peranakan jewelry making has not died. The craftsmen resumed their work after the war. There are still goldsmiths today who make Peranakan jewelry. It is a style which grows in popularity with every passing year.

One of the most famous owners of modern Peranakan jewelry is Queen Elizabeth II.  The Bird of Paradise pendant/brooch was created with 18K gold and 61 round brilliant cut diamonds. It was a gift from Singapore to the Queen for her Diamond Jubilee in 2012.

The Queen has received many jewelry gifts over her long reign and many go unworn except when the occasion demands it. Yet, this gold filigree brooch has been worn several times – this blogger and avid Royal jewelry fan has kept count – including at the 2015 christening of her great-granddaughter, Princess Charlotte. It’s clearly one of her personal favorites, not just to be saved for formal state occasions involving Singapore.
The unusual domed pendant/brooch was designed by Thomis Kwan of Foundation Jewellers in Singapore. They specialize in modern Peranakan jewelry.
Lin Teck Ngian, a master jeweler at the company, was the goldsmith who made the exquisite brooch.  He is featured here in this video talking about his craft and the making of the Bird of Paradise brooch. I hope younger artisans will learn from him to keep the art and style alive for the future.